For Halloween - Let's Talk About Blood

JUST IN TIME FOR HALLOWEEN
LET'S TALK ABOUT BLOOD

Since mankind first started slaughtering animals for food, blood has been a part of our diet. Gross? Maybe. Admittedly, an uncut Black Sausage looks like an unappetizing blood clot. 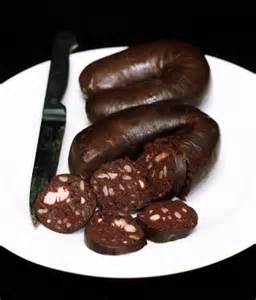 Still, blood helped satisfy nutritional needs for our ancestors and can still be found in many diets today. From blood tofu in Asia to blood pancakes in the Scandinavian countries, blood, as an ingredient, can be found in almost every cuisine throughout the world. It is used as a ceremonial drink, soup thickener, and gelled into a high energy snack.

Where I once thought Black Pudding (blood sausage) was unique to the UK, I've found there are countless varieties of blood sausage consumed throughout Europe, Central, and South America. Think Americans don't eat blood sausage? Think again. Canjun style is called boudin noire in Louisiana and is served with rice. The southwestern part of the United States frequently chows down on Mexican Moronga.

Historically and in modern day blood is used for more than drinking and eating.

Rumor has it that 16th century Hungarian Countess, Elizabeth Bathory bathed in blood because she believed it would keep her skin fresh and youthful. Now the Countess took things entirely too far as she had over 600 young female servants slaughtered for this beauty regimen. Local Officials seemed able to overlook all the missing peasant girls that went to work in the Bathory household and were never seen again. That changed when she ran out of the local girls, and made the mistake of killing a couple of young women from the upper class. This led to Bathory's subsequent exposure and gruesome sentence. For her crimes, she was boarded up alone in her room.

We're a little more civilized today but the hope that blood will retain or restore skin resilience carries on. Vampire Facials or 'Facelifts' are a costly fad where blood is drawn from the client, spun in a centrifuge to separate the platelets. These platelets are then re-injected into the face. Most do see improvement but the results quickly fade making it outrageously expensive at over $1,000. a treatment.

More importantly, blood research is ongoing and there's a particularly promising trial with mice. Old mice are injected with blood from young mice, and, so far, results look promising. The older mice show signs of cognitive improvement and rejuvenation. This might be a real boon for Alzheimer's sufferers.

So this Halloween when ghoulish monsters come to your door(or you can wait for the Zombie Apocalypse) offer Black Pudding instead of the usual treats.

Take extra care stuffing those sausage casings - I've heard it can be a bloody mess and leave your kitchen looking like a MASH Unit.

How to make it

Or try this Moronga Sausage from Mexico

R.E. Mullins, author of THE BLAUTSAUGERS OF AMBER HEIGHTS SERIES. 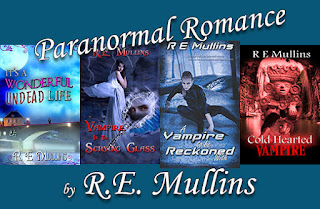 To buy my books
Amazon

To see what else I'm up to check out remullins.com
Posted by remullins at 10:23 AM No comments: