Public shaming would be an effective way to regulate the “irresponsible behavior” of unwed mothers, misbehaving teenagers and welfare recipients, former Florida Gov. Jeb Bush (R) argued in his 1995 book Profiles in Character.
In a chapter called "The Restoration of Shame,” the likely 2016 presidential candidate made the case that restoring the art of public humiliation could help prevent pregnancies “out of wedlock.”


One of the reasons more young women are giving birth out of wedlock and more young men are walking away from their paternal obligations is that there is no longer a stigma attached to this behavior, no reason to feel shame. Many of these young women and young men look around and see their friends engaged in the same irresponsible conduct. Their parents and neighbors have become ineffective at attaching some sense of ridicule to this behavior. There was a time when neighbors and communities would frown on out of wedlock births and when public condemnation was enough of a stimulus for one to be careful.

Bush points to Nathaniel Hawthorne's 1850 novel The Scarlet Letter, in which the main character is forced to wear a large red "A" for "adulterer" on her clothes to punish her for having an extramarital affair that produced a child, as an early model for his worldview. "Infamous shotgun weddings and Nathaniel Hawthorne's Scarlet Letter are reminders that public condemnation of irresponsible sexual behavior has strong historical roots,” Bush wrote.
As governor of Florida in 2001, Bush had the opportunity to test his theory on public shaming. He declined to veto a very controversial bill that required single mothers who did not know the identity of the father to publish their sexual histories in a newspaper before they could legally put their babies up for adoption. He later signed a repeal of the so-called "Scarlet Letter" law in 2003 after it was successfully challenged in court.

Bush's ideas about public shaming extended beyond unwed parents. He said American schools and the welfare system could use a healthy dose of shame as well. “For many, it is more shameful to work than to take public assistance -- that is how backward shame has become!” he wrote, adding that the juvenile criminal justice system also "seems to be lacking in humiliation," Bush wrote.


In the context of present-day society we need to make kids feel shame before their friends rather than their family. The Miami Herald columnist Robert Steinback has a good idea. He suggests dressing these juveniles in frilly pink jumpsuits and making them sweep the streets of their own neighborhoods! Would these kids be so cavalier then?

It's worth pointing out that the kind of public shaming Bush described has come under fire recently in response to the growing trend of parents humiliating their children on social media to punish them. A 13-year-old girl committed suicide last month after her father posted a video of himself cutting off her long hair on YouTube because she had disobeyed him.
YouTube and social media, of course, did not exist when Bush wrote his book in 1995. But the former governor makes clear that "society needs to relearn the art of public and private disapproval and how to make those to engage in some undesirable behavior feel some sense of shame."
Bush did not respond to a request for comment.

Bush might have said it first in 1995 but later actions prove he still feels the same way. As you can see by the article, as governor of Florida in 2001, Bush had the opportunity to test his theory on public shaming. He declined to veto a very controversial bill that required single mothers who did not know the identity of the father to publish
their sexual histories in a newspaper before they could legally put their babies up for adoption. He later signed a repeal of the so-called "Scarlet Letter" law in 2003 after it was successfully challenged in court.

No matter what his current rhetoric might be, he's shown his true colors, and do we really want him as our next president? Instead of going back to the dark ages by 'shaming' he ought to have made sure birth control was covered by insurance and abortions were safe and legal. His, or anyone's, religious
values are out of place in government AS THEY ARE NOT SHARED BY ALL. So you believe birth control and abortions are wrong - don't use them and don't have them. Those who don't share that belief should have access.
Yes, our founding fathers (except, maybe, Jefferson) adhered to the manifest destiny of the white man. BUT THAT'S NOT WHAT THEY WROTE. In the documents created to start our country, they made it clear that all were created equal under the law, and church and state were to be separate.
People, it is time we remembered that. Our laws are meant to secular - color blind and made without the influence of religious belief - so they encompass all creeds, genders (this includes LGBT), and races equally.
All have a right to personal freedoms. I know this frightens those older, white males who fear losing control of the government. But it is time to step down. Your rules are becoming more and more ludicrous as you try to retain a grip on the reins of power, as you desperately try to cling to the days of white entitlement. The public, where white males are no longer the largest voting group, is watching.
White police officers quitting because a black female is elected to office, shooting unarmed black teens, are overstepping their authority into brutality. Schools - so afraid boys will be sexually charged by seeing a girl's shoulders that one sent a five-year-old girl home because her sundress had spaghetti straps. Perpetuating a rape environment where a woman is forced to bear a child created during an act of violence against her, and then to add salt to the injury they give the rapists legal rights to that child.
It's time to stop allowing conservatists to write laws based on their own religious beliefs. Believe it or not, I can love my country and yet not be a Christian.
And give these people a few science and biology lessons as their views are woefully ignorant:
On the female reproductive system we have these kinds of comments.
"The facts show that people who are raped —who are truly raped—the juices don't flow, the body functions don't work and they don't get pregnant. Medical authorities agree that this is a rarity, if ever."—former Rep. Henry Aldridge (R-N.C.)
Life begins "from the first day of the last menstrual period of the pregnant woman."—Statement from an Arizona bill signed into law by Republican Gov. Jan Brewer. (See? Even some women don't fully understand conception.)
"If it's a legitimate rape, the female body has ways to try to shut that whole thing down."—former Rep. Todd Akin (R-Missouri).
"As long as it's inevitable, you might as well lie back and enjoy it." —Former Texas Republican gubernatorial contender Clayton Williams on rape.

On climate change we have:
“I do not believe that human activity is causing these dramatic changes to our climate the way these scientists are portraying. And I do not believe that the laws that they propose we pass will do anything about it.” -Senator Marco Rubio, a member on the Senate Subcommittee on Science and Space
"The pope should leave science to the scientists." -Rick Santorum made this comment about Pope Francis, who holds a degree as a chemical technician and worked as a chemist before turning to the priesthood.
Now these men and women have a right to their narrow minded, bigoted, and misogynistic beliefs. What they don't have is the right to impose their values on those who disagree with them. Let's vote this type of person out of our governing body. Isn't it long past time to stop discriminating against those adhering to different creeds, all gender orientations, and different races?

And I haven't even started on his words about the homeless or unemployed...
Don't perpetuate the hate by voting for this man.
Posted by remullins at 11:23 AM No comments:

FIVE STAR REVIEW FOR VAMPIRE IN THE SCYING GLASS by R.E.MULLINS

Lovers of the Paranormal Reviewer, Denise had this to say about
VAMPIRE IN THE SCRYING GLASS 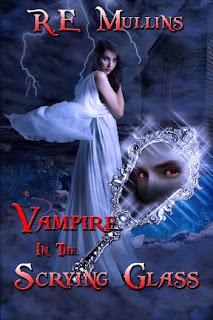 Vampire in the Scrying Glass' pulled me in from the beginning and I couldn't put it down. The storyline was well written and an incredible read. The way it played out was full of action, drama, mystery and some pretty cool beings. The characters were awesome. I loved Morgan and her sense of humor. She turned out to be a powerful character. Her inner strength was brought to the surface and it was a beautiful thing to read. I bonded with the characters in the first book, 'Its a Wonderful Undead Life', and it continued and grew into this book. Rafe took me by surprise. He started as an arrogant a$$, but you could tell there was a softer, gentler side to him. I loved when he was talking to Morgan and said:
"On a tombstone, between the dates of birth and death, there is a dash. Such a tiny mark, but it represents everything you’ve done and experienced in life. What do you want your dash to say about you?"
Quite beautiful to me. Plus he's sexy hot. This series just keeps getting better. This book could be a standalone, but reading the first book gives you the whole story on how things began. I look forward to reading the next book in the 'Blautsaugers of Amber Heights' series. A great add to your tbr list. Recommended read.
Posted by remullins at 4:08 PM No comments: