Picking on the South, yes I am

This was the article on FB that I decided to comment on:

Author: Elizabeth Preston July 6, 2015 8:30 pm
We saw it coming. We knew it was nearly inevitable. First, it was creationism in Biology textbooks. Then, it was the battle for Moses in the Social Studies textbooks, which included teaching right-wing political views as history. And finally, they’ve successfully done the impossible. The Washington Post is reporting that this fall, over five million public school students will be taught using  social studies textbooks that do not so much as mention the Ku Klux Klan or Jim Crow laws. In fact, it is reported that the new Texas guidelines for American history “barely address racial segregation.”
And how is the history of the Civil War being taught? Well, it was states’ rights of course!
Pat Hardy, a Republican who sat on the state board of education in 2010, when these new standards were adopted, says:


“There would be those who would say the reason for the Civil War was over slavery. No. It was over states’ rights.”

According to Hardy, the issue of slavery was a “side issue to the Civil War” and now that is exactly how it will be taught in public schools in Texas. Children will be learning that the war was driven because of “sectionalism, states’ rights and slavery” – deliberately documented in that order in the new books.
Amazingly enough, Rod Paige, who is a Republican who served under George W. Bush as education secretary, met this change with criticism:


“I’m of the view that the history of slavery and civil rights are dominant elements of our history and have shaped who we are today. We may not like our history, but it’s history.”

While the fury surrounding the confederate flag continues, we are reminded just why there is so much “pride” on behalf of the southern states – revisionist history. And now, that history is coming to Texas school kids this fall. Pew Research Center conducted a survey in 2011 which showed that nearly half (48 percent) of those asked believe the Civil War was about states’ rights while 38 percent said it was mainly about slavery. Just like Texas’ textbooks, those that argue states’ rights seem to omit the right the south was fighting for: keeping human beings as property.
The civil rights era was an extremely historic time for our country. Yet, kids in Texas won’t be learning the history of Jim Crow laws, the role the KKK played in the oppressive nature of the south, or the impacts of racial segregation. Because apparently knowledge is an extremely dangerous thing when attempting to mold the future base of the grand old party.
How many racism deniers will be created when their public schools omit the important lessons that our history teaches us? Will future generations understand the tragedy that existed in the south that was not only the act of owning and selling human beings, but then also using that as a compelling reason to rally for “states’ rights” TO continue to own and sell human beings as property – so strongly that they were willing to divide the country?
Texas’ schools ranked 39 in the nation – certainly not a stellar grade for the Lone Star State.

I stepped into the forum by saying:
Ah, Dave, I expected better of you. I'd hope you'd finally make some effort at a meaningful contribution to the dialogue.

Maybe you saw that you couldn't. As, truthfully, you'd have had to do a lot better than what you'd written so far. None of your previous comments made much sense. Take this one: 'the US won the Spanish American war also, didn't stop Spanish from being Spanish or flying their flag. We won the war with Japan, no one is demanding they don't fly their flag or honor their fallen.' How is this a rational or valid point? Neither Spain or Japan ever belonged to the US. Our wars with these sovereign nations had nothing to do with secession.

Did you consider it a rational or constructive rebuttal to my original comment to call it a national problem? The post in question is about Texas changing the history book so they no longer reflect reality.

You found it necessary to say that KKK is in Michigan. Again I'm not sure what bearing that has on the subject at hand. However, I sent you the most updated link I could find showing all the places the KKK have headquarters. Doesn't change the fact the hate group originated in Tennessee.

You then point out there are good and bad people. Yes, dear, we all know this to be true. It is time for the good ones to stand up for what is right, to recognize and take action ensuring the equality of all. It's time for the needs of the many to outweigh the needs of the few. Confederate flags (a symbol of hatred from the desegregation years) should be removed from public view. Keep your heritage in museums and not where the sight of it hurts others.

Oh, and, my favorite comment, that you've got black friends. I'm so pleased for you. Now, Dave, why don't you honor these friends by not candy-coating their history.

History shouldn't be rewritten so the southern states can feel better about themselves. You can't hide the past of slavery, Jim Crow laws, and rampant discrimination.

Take down the confederate flag, keep history accurate as it's more important to honor the living than the dead.

What's more? I believe you know this. Which is why you suddenly felt it necessary to act as if you didn't give a damn by feigning boredom.

Deny if you must but if you hadn't cared - if you didn't know you stood on the wrong side of history - you wouldn't have been so upset about my comment in the first place.

You'll have to look it up - you do know how to research don't you? - but I believe your *yawn* is number 11on the list of how men argue. It's an underhanded, childish manipulation to win an argument already lost. Did you really think I'd back down because you tried to diminish my viewpoint? You're all posturing without substance and all you've managed to do is convince me you are another bigot with their head in the sand.

The only thing you got right is that I do pick on the south. I pick on that part of our nation because that is where confederate flags are still being flown over state capitals. I pick on southerns because of situations like Texas where they're trying to revise history. Any attempts to hide the dirty past of slavery, Jim Crow laws, and the horrors enacted by the KKK are dishonorable.

Why do I pick on the south? Let me end this with a sight I saw all too often growing up. Look at this woman's face, contorted in hate, as she screams slurs. 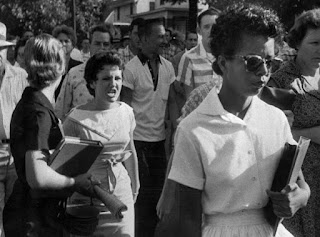 How has it changed? 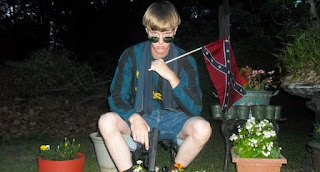 And, finally let's put the whole the civil war wasn't fought over slaves issue to rest. According to the Confederate States of America - Declaration of the Immediate Causes Which Induce and Justify the Secession of South Carolina from the Federal Union, it states:

These ends it endeavored to accomplish by a Federal Government, in which each State was recognized as an equal, and had separate control over its own institutions. The right of property in slaves was recognized by giving to free persons distinct political rights, by giving them the right to represent, and burthening them with direct taxes for three-fifths of their slaves; by authorizing the importation of slaves for twenty years; and by stipulating for the rendition of fugitives from labor.
We affirm that these ends for which this Government was instituted have been defeated, and the Government itself has been made destructive of them by the action of the non-slaveholding States. Those States have assume the right of deciding upon the propriety of our domestic institutions; and have denied the rights of property established in fifteen of the States and recognized by the Constitution; they have denounced as sinful the institution of slavery; they have permitted open establishment among them of societies, whose avowed object is to disturb the peace and to eloign the property of the citizens of other States. They have encouraged and assisted thousands of our slaves to leave their homes; and those who remain, have been incited by emissaries, books and pictures to servile insurrection.
For twenty-five years this agitation has been steadily increasing, until it has now secured to its aid the power of the common Government. Observing the forms of the Constitution, a sectional party has found within that Article establishing the Executive Department, the means of subverting the Constitution itself. A geographical line has been drawn across the Union, and all the States north of that line have united in the election of a man to the high office of President of the United States, whose opinions and purposes are hostile to slavery. He is to be entrusted with the administration of the common Government, because he has declared that that "Government cannot endure permanently half slave, half free," and that the public mind must rest in the belief that slavery is in the course of ultimate extinction.

You can see the document in its entirety at http://avalon.law.yale.edu/19th_century/csa_scarsec.asp
Posted by remullins at 11:55 AM